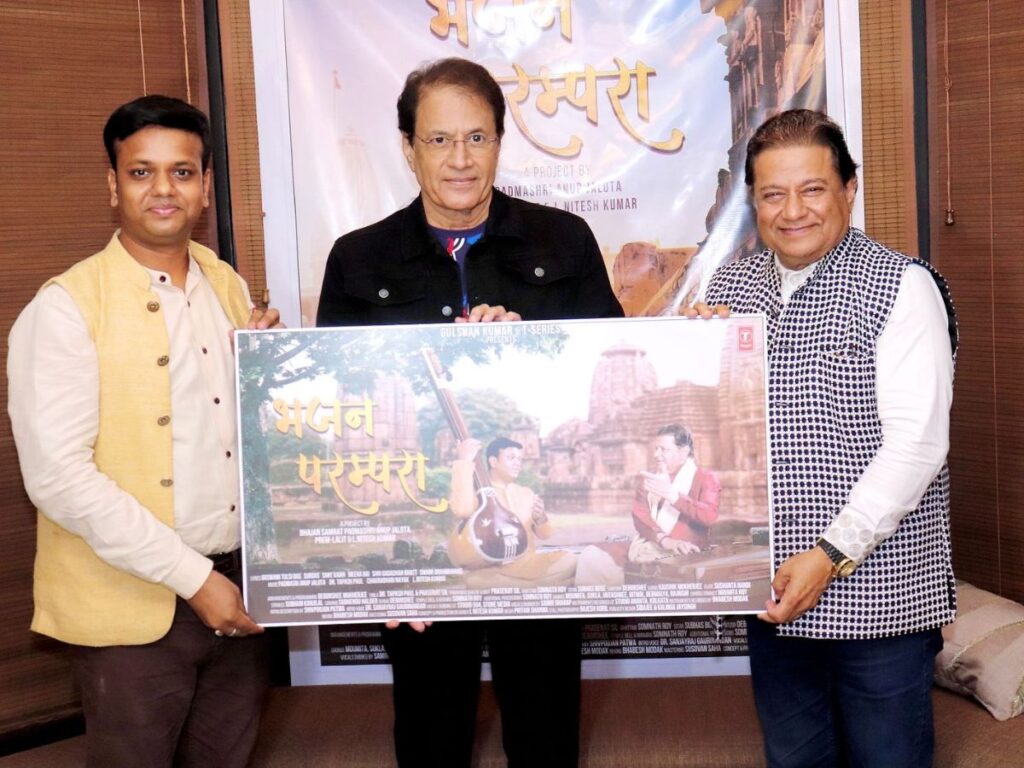 Mumbai (Maharashtra) [India], October 17: Arun Govil, who played the most famous character of Lord Ram in Ramanand Sagar’s TV show ‘Ramayan’ and Bhajan Samrat Anup Jalota together, launched ‘Bhajan Parampara’, an album which has 9 devotional bhajans by great poets and saints from the great land known as India. The album has been released today by music company T-Series. The whole album has been designed by L. Nitesh Kumar. The album has turned out to be one of the greatest bhajan album’s ever. It is interesting to note that this album has been brought out by Anup Jalota’s disciple L. Nitesh Kumar to take forward the legacy of our rich bhajan tradition.

During the release of the album a joyful Arun Govil said, “Whenever we talk about bhajan, Anup Jalota’s face is what we instantly remember. The album ‘Bhajan Parampara’, which has been launched today, has bhajans sung by Anup Jalota and L. Nitesh Kumar both and the interesting part is that both of them had also composed bhajans for the same album. I congratulate them for creating such a melodious and great devotional album for all of us. Anup Jalota is my best friend and if his name is attached with this album then I can say with confidence that this album is unlike any other bhajan albums. Once you hear out the full album you will realise this is no ordinary album”.

Arun Govil didn’t stop here. He was all praise for L. Nitesh Kumar too. While talking about L. Nitesh Kumar, Arun Govil said that he feels that he is a great disciple of Anup Jalota. I loved listening to his voice and enjoyed all the bhajans which he has composed and sung for this great album. Anup Jalota and L. Nitesh Kumar both have distinct and unique voices in their own right yet they have a very similar style of singing bhajans which is very magical and captivating. This Guru-Shishya jodi is a great practitioner of devotional bhajan singing tradition in india and I am proud of both of them.”

Anup Jalota said, “L. Nitesh Kumar is totally into bhajans and singing bhajans is his first love. Album ‘Bhajan Parampara’ has 9 bhajans altogether and today on the joyous occasion of the release of this album, his proud parents had also came  from Orissa to attend this glorious launch function. Arun Govil is also here to give him good wishes for his better and bright future. He has all the blessings from all of us so that his  bhajan album gets all the success it truly deserves”.

On this occasion L. Nitesh Kumar said, “Today I am feeling that one of my long cherished dream had been fulfilled. I am very lucky that my album had been launched by one and only Arun Govil, the man who brought alive the character of great Lord Ram and my mentor and one of the greatest bhajan singer Anup Jalota Ji. My work has always been praised and I really feel blessed that my mother-father, my Guru and my listeners and viewers have always supported me in my endevours. Through this album I have tried my best to bring forth our rich Indian traditions and our rich literary heritage.

This unique album contains 9 divine bhajans by our greatest poets and saints from our country. All the 9 amazing bhajans from this album had been amazingly composed by legendary music composers of our times. The bhajans are based on various ragas and taal and instruments like Sitar, Sarod, Flute, Sarangi, Tabala, Dafali, Medolin, Pakhwaaz, Manjeera, Morsing, Ghatkam, Temple bells had been used to composed all the bhajans. All these instruments had created unique sounds which had helped make these bhajans more melodious. Throughout the album, you can feel the beauty and melody of Indian traditional music. Apart from using traditional musical instruments new recording technique had been used to enhance the quality of all the bhajans to a great level.

The passion and artistry of Shailesh Ghanchi in the world of Rajasthan.