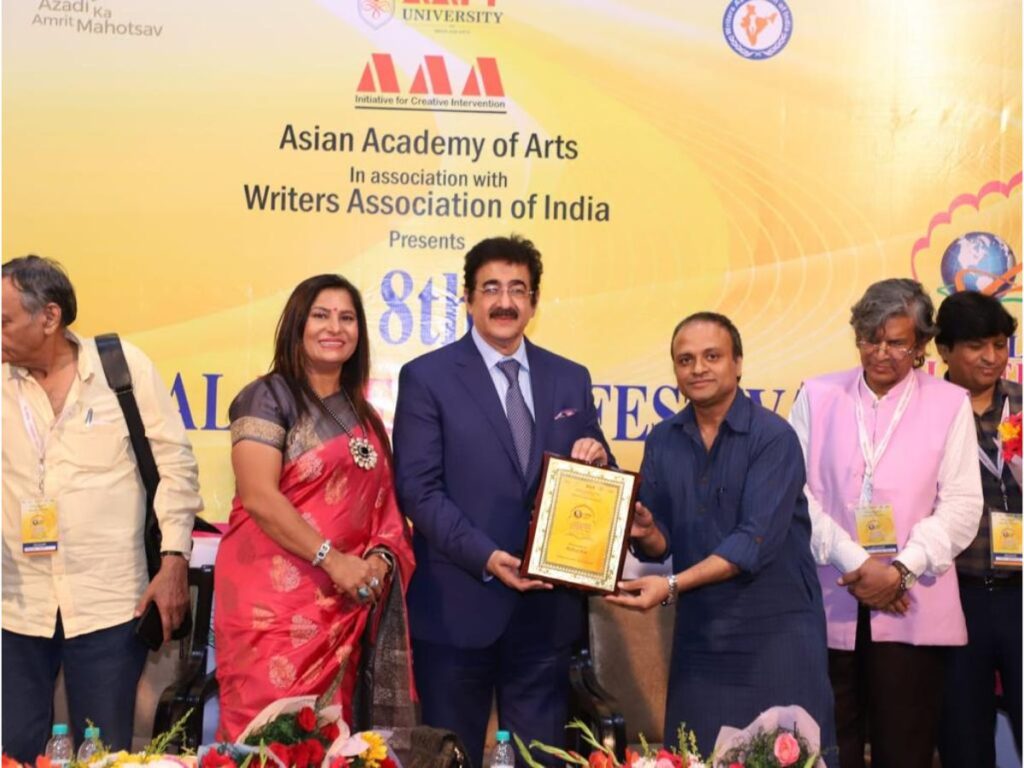 November 29: On the evening of Friday, 7th October, 2022, the second edition of the Hindi Gazals Book ‘Tera Aks” of Rahul Rai Gupta “Tanha” has been released with the solidarity of Writers Association of India, in the 8th Global Literary Festival of Asian Academy of Arts from Raahi Publication in Marwah Studios, Film City, Noida.

There were so many renounce personalities from the literary world such as Senior Writer, Poet, Critic & Media Expert Laxmi Shankar Bajpai who has written forward of this book, Senior Poet Vigyan Vrat, Senior Poet Surender Shajar, Senior Poetess Dr. Mala Kapoor Gauhar, Poet Moien Shadab, Poet Sharaf Nanparvi, Poetess and Storyteller Renu Hussain, Poet Shahid Anjum, Poetess Sapana Ahsaas, Poet Akhtar Azmi and the programme was going so well due to their presence. Laxmi Shankar Bajpai said that this book has all the shades of love, loneliness, positivity towards life which seems marginalized in the literary world.

There are 80 Gazals in this book which have been written beautifully. Even a single word of each Gazal says the story of heartbreak. The reader indulges into it from the very beginning. There is an abundance of depth in this book and the writer directly connects with the audiences. There is sorrow, solitude, stories of heart breaking and humour as well in the Gazals.

First edition of “Tera Aks” was published in 2016 and sold out. The people loved it so much. Three Gazals from the book have been presented as Music Video. Singer Rashid Khan has given his melodious voice for these Gazals and the audiences loved his voice. Rashid Khan comes from Chandausi of Uttar Pradesh. He has given its music too. Rahul Rai Gupta has featured himself in one of the music videos. All the music videos are available on their youtube channel. These Videos are filmed beautifully by film director Suhail Qureshi. The locations for these videos are so beautiful.

When it comes to the writing of Rahul Rai Gupta, a specific type of depth seems in his writing, in which he recites his feelings very easily. “Tanha” is his pen name.  He is a Bollywood Film Director & Producer too.

Rahul Rai Gupta has been asked to say a few words about his book and firstly he thanked his parents who are no more in this world and he got emotional. Further he said that he has written this book by nurturing his sorrow and loneliness. There are so many feelings, dreams and aspirations in this book, which are incomplete due to some circumstances and he shaped them in the form of Gazals.

He hoped that the audience will give much more love to the latest edition too and will connect with his sorrow, loneliness from the bottom of their hearts as well as they will be enjoying reading his book.

Soon, this book will be available on the offline & online platforms such as Amazon, Flipcart etc. Readers can buy book from these platforms & nearest book stores and connect with the Tanhai of Poet Rahul Rai Gupta “Tanha”