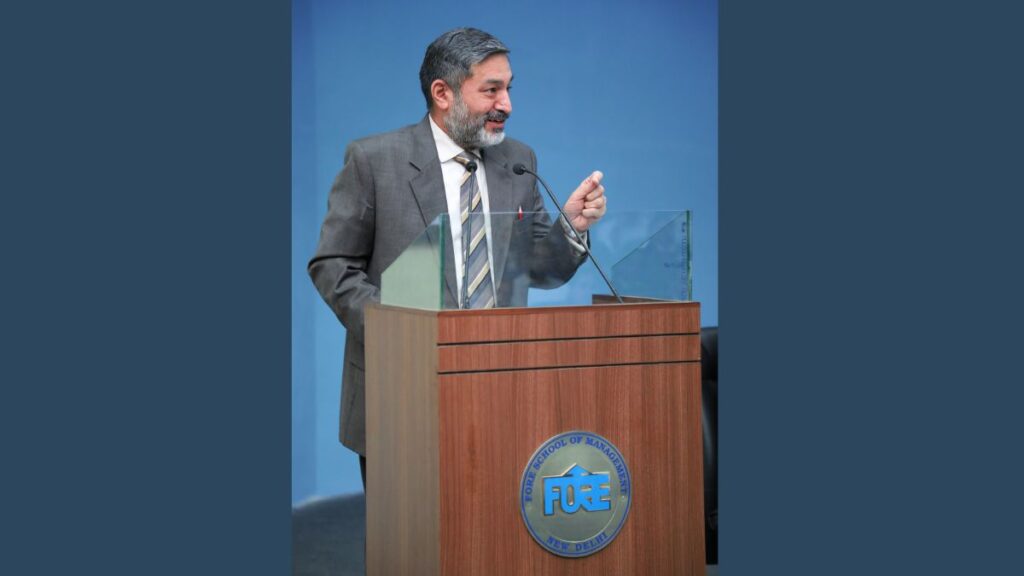 India, November 30: Foundation for Organisational Research and Education(FORE) has launched the “Eminent Speaker Series” under the leadership of Dr. Vinayshil Gautam, Vice Chairman, FORE. The series is a step further in the continuing effort of FORE to connect with distinguished persons from every sphere of society and help its stakeholders with better learning and awareness.

Shri Gunjeet Singh Pannu, President of the Income-Tax Appellate Tribunal was invited to deliver the first lecture of the series on the theme “Taxation Reforms and taking Businesses and Economies to the Next Level of Development”.

Dr. Jitendra Das, Director, FORE School of Management, welcomed the chief speaker, Shri Gunjeet Singh Pannu and gave an overview of the taxation and the role of ITAT before opening the floor for the lecture. He explained, “The ITAT (Income Tax Appellate Tribunal) essentially deals with direct taxes. ‘At ITAT, the process is relatively simple where one needn’t have to arrange for the affidavits and witnesses, which helps in faster adjudication” he added.

Dr. Vinayshil Gautam, Vice Chairman, FORE also shared his views on the matter. He said, “Land and revenue are the two pillars of the running governance. A country of the size of India cannot survive on the revenue of percentages of people who come in. Therefore, litigation is a powerful process.”

Shri. G.S. Pannu shared, “States have realized that the large corporations are the ones who owe to the world but aren’t doing so.  Due to the exploitation of tax avoidance policies, there are reports of 4 billion phantom FDIs,” he added. Another reform, he shared, has come through FATCA (Foreign Account Tax Compliance Act). He said, “FATCA and digitization are changing the way of doing business—and it is impacting and characterizing way of taxation. Earlier there was a curtain between businesses and tax authorities, but now there is more transparency.”

Sh. G.S. Pannu shed some light on the contributions of ITAT, saying, “From a dispute resolution point of view, tribunal court has been doing a wonderful job. 32 lakh judgements have already been passed and the pendency has been brought down to 40000. In fact, Philip Baker, in a conference in 2010, went on to commend ITAT; jurisdictions of ITAT are the most referred to everywhere, even in the US. There are also efforts being made to bring a paradigm shift in the way business is done. All this will bring uniformity. And, if there is uniformity, it becomes a culture of the improved framework,” and concluded the session.

Post lecture, Dr. Jitendra Das, Director, FORE, awarded a moment to Sh. G.S. Pannu as a token of appreciation for gracing the event with his presence. Prof. Sanghamitra Buddhapriya, Dean (Academics), FORE School of Management, also delivered a vote of thanks to Sh. G.S. Pannu for presenting a wonderful lecture for the first Eminent Speaker Series and sharing his valuable insights on “Taxation policies in the global as well as Indian context” with the attending students and faculty members.